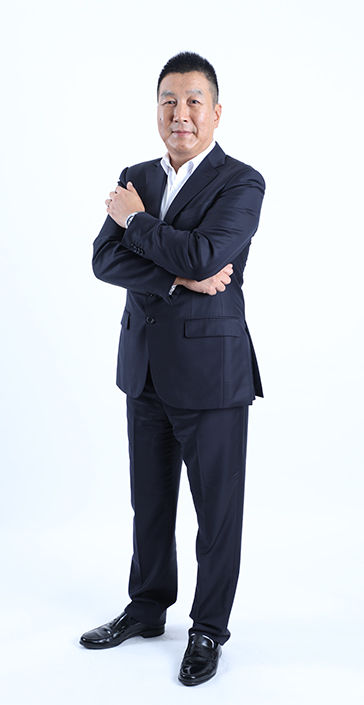 Mr. Poon Fuk Hei, is Chief Executive Officer (“CEO”) and Chairman of the Executive Committee of Companhia de Telecomunicações de Macau, S.A.R.L. (“CTM”). Mr. Poon joined CTM in 1987, who became the CEO of CTM in 2007 and has been playing a pivotal role for the sustainable development of CTM.

Mr. Poon is committed to innovation and the development of “Digital Macau”, under Mr. Poon’s leadership, CTM has been consolidating the leading position in the local telecoms arena in a rapidly changing market. With visionary insight, Mr. Poon has ushered the changeover of the 3 core networks, enabling Macau to keep abreast of the of global technology trend, laying a solid foundation for Macau in the construction of a smart city.

Mr. Poon values talents, he has been cultivating batches of outstanding talents for the telecom industry in Macau. Under the open-minded leadership of Mr. Poon, the CTM team develops sustainably, giving a strong vitality for the development of Macau’s telecom industry.

2019 was an extraordinary year in which we welcomed the significant moments of the 70th anniversary of the founding of the People’s Republic of China, the 20th anniversary of the return of Macau to the Motherland and the inauguration of the fifth-term government of the MSAR, every inspiring scene still remain vivid. In 2019, despite the ever-changing external environment, with the backing of Mainland China, Macau achieved exciting results in the continuous deepening of “one center, one platform” position and acceleration of the integrated development of the Guangdong-Hong Kong-Macau Greater Bay Area.

As a locally rooted telecom service provider, in 2019, CTM actively collaborated with and responded to the policies of the MSAR Government and continued to actively follow the principle of “Investing in and Serving Macau” with the full support from our major shareholder CITIC Telecom International Holdings Limited. In addition to continuously strengthening the investment in business and optimizing customer experience, CTM has maintained close communications and connections with industrial, commercial enterprises and the associations, and contributed to the construction of “Digital Macau 2.0” smart city, facilitation of the integrated development of the Greater Bay Area, promotion of the development of “one center, one platform” in Macau, as well as the maintenance of Macau’s long-term prosperity and stability.

In 2019, CTM made a total investment of nearly MOP$250 millions including, the development of the new “CTM Cloud” powered by Tencent Cloud’s technology, the further enhancement to the quality of the full fiber-optic network and 4G+ mobile network, the optimization of Wi-Fi hotspot coverage, and the expansion of CTM Software Development Center.

As at the end of December 2019, CTM’s 4G+ users and fiber-optic users reached 1.13 million and 166,000 respectively. In 2019, there were over 2,500 free CTM Wi-Fi hotspots covering various districts, bus routes and TurboJET vessels travelling between Hong Kong and Macau, with the number of connections of over 450 million and usage of over 5 million GB. The figures reflected the Macau public’s rising demand for faster network services and the urgency in further smart application services for different daily needs.

The preparation works of 5G network construction was the focus of CTM in 2019. Over the past year, CTM maintained close connections with network suppliers, kept abreast of the development of 5G cell sites and technology application, and evaluated the deployment plan of 5G cell sites in Macau. Exploring in depth with the government the issues including 5G license and spectrum resources, CTM shared the same view of the government and industry, aiming at early provision of 5G service in Macau. In addition, CTM collaborated with different industries to provide a 5G network environment to facilitate development of a 5G application ecology cater to the Macau community.

Entering 2020, CTM has acted in accordance to the MSAR government’s measure in battling the pandemic, while fulfilled the obligation of safeguarding the stability of local network. Despite the pandemic, we have ushered in the 5G network construction in full swing with an investment of over MOP600 million earmarked for the first phase 5G installation work. Despite the challenges in the 5G network construction, including multifold increases in the number of 5G base stations compared to that of 4G base stations, greater power consumption, and more spectrum bands to be used, all of which will lift the expenses to be incurred in the 5G network construction, our determination in bringing 5G to the community is not shivered. As a locally rooted company and a pioneer in the industry, CTM remained committed to contribute to Macau and withhold the determination in overriding difficulties to realize 5G service in town.

Pioneering to collaborate with the Industry to experience 5G technology

CTM has invested significantly to introduce the industry’s advanced Tencent Cloud’s technology to Macau in the past year, and developed the new “CTM Cloud” so as to facilitate companies to develop their smart application solutions more flexibly and efficiently. Meanwhile, CTM also actively expanded the scale of its Software Development Center and entered into a comprehensive strategic partnership with Neusoft Group, a leading IT solutions and service provider in Mainland China, to shape a smart application ecosystem riding on “CTM Cloud” platform to provide more high-quality and efficient smart applications and cloud services to all sectors of Macau.

2019 has unveiled the testing of 5G application in Macau. The first 5G call made in May 2018 signified the key milestone along the development path of 5G in Macau. CTM was the pioneer to collaborate with various stakeholders on 5G testing. CTM signed a 5G new media application cooperation memorandum with TDM, showing the first 4K UHD real-time interactive live broadcast based on 5G technology in Macau and providing 5G panoramic live broadcast at the “Walk for a Million” event, to jointly create 5G new media HD live broadcast applications.

At the major celebrations events of the 20th anniversary of the establishment of MSAR, CTM provided 5G network access for CCTV International Channel and People’s Daily New Media, safeguarding the transmission needs and providing the citizens with a faster, higher definition display of the grand occasions.

Further deepening the integrated development of the Greater Bay Area

In order to strengthen the cooperative development between Zhuhai and Macau, CTM and Huafa Group entered into a strategic cooperation agreement on industrial technology in the Greater Bay Area in October 2019 to form a strategic partnership with an expectation that both parties may bring out their best to launch in-depth cooperation on the four major areas: Data Center, Industrial Base, Intelligent Grid, and Cross-border Data Center, aiming at creating a smart city cluster that keeps pace with technology development. At the end of 2019, we signed a memorandum of understanding with Dahengqin Technology Co., Ltd., pursuant to which, we will carry out an in-depth cooperation on the construction and promotion of dedicated channels for international Internet data transmission in Hengqin New Area.

To enhance and consolidate Macau’s role as the “commercial and trade cooperation service platform between China and Portuguese speaking countries”, CTM actively played its role as a member of the International Association for the Portuguese Speaking Communications to sign a memorandum of understanding with Angola Cables to advance digital opportunities between Mainland China, Portuguese-speaking countries and Macau.

I and my team will continue to accommodate the policies of MSAR government and devote in the development of “Digital Macau 2.0” and launch more intelligent applications that cater the need of the local community. . With open- mind, we envisage to create win-win cooperation with different stakeholders to establish Macau as a role model of smart city ideal for living, working and travelling, making greater contribution to development of the Guangdong-Hong Kong-Macau Greater Bay Area Smart City Cluster.